Home Europe Everton made offer ‘between €27m and €32m’ for defender – Player was...
SHARE

Starting just after the end of the January transfer window thanks to Le10 Sport, the story of Everton’s interest in Gabriel Magalhães has grown considerably over the past month or so.

Other outlets then picked up on it, and now L’Equipe seem convinced the Toffees have made a bid for the player ahead of the summer.

Credit where credit is due, however, as Le10 were the ones to start the story and also revealed last week the Goodison Park based side had made a bid.

They said Leicester City also had come forward with an offer, which fits with Monday’s claims from L’Equipe, who write in their daily newspaper that ‘two English teams, including Carlo Ancelotti’s Everton, and an Italian club have made offers between €27m and €32m, bonuses excluded’. 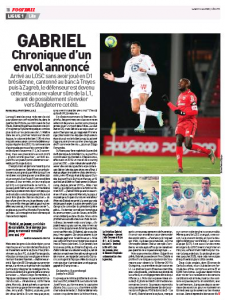 Furthermore, Gabriel was supposed to go visit some of the interested side’s infrastructures, but that was before the Covid-19 outbreak started, meaning everything is currently on hold.

There’s no indication Lille have accepted the bids, but L’Equipe seem pretty convinced the Brazilian will leave the north of France at the end of the season, saying he could ‘possibly fly towards England this summer’.

Whether or not that’s to Everton, we’ll just have to wait and see.