Fotomac claim Nottingham Forest are ready to make their move to sign Galatasaray striker Mbaye Diagne ahead of the summer transfer window.

Sabri Lamouchi’s side are currently sitting sixth place in the Championship and have a decent chance of promotion to the Premier League, depending on how the season is resolved.

It’s stated Nottingham Forest officials are closely monitoring Diagne’s situation at Galatasaray and will make a move at the end of the season for the Senegalese striker.

Gala loaned Diagne to Club Brugge at the start of the season, despite him scoring 31 league goals during the last campaign. He’s had his troubles with Brugge’s manager and some of his teammates, and as a result hasn’t played for the Belgian club since November. 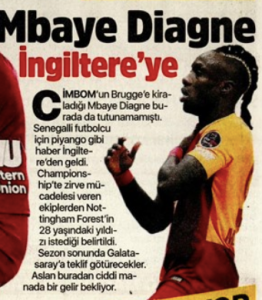 However, according to Fotomac, Forest could offer him an escape route and sign him in the summer.

The Turkish newspaper also reports Galatasaray’s board are expecting a ‘decent return’ from Diagne’s potential sale to the English club.

His contract with Gala will expire at the end of June 2023.