The reports linking Tottenham Hotspur’s Christian Eriksen with a move to Real Madrid have only intensified since Zinedine Zidane returned to the club in March.

His contract with his current employer will expire in 2020 and last month, we carried a report from AS, who explained the 27-year-old’s plan is to not sign a new deal with Spurs.

The front page of today’s edition of AS reads ‘Eriksen verbal agreement’ in capital letters and Los Blancos are already negotiating with the Premier League outfit for the Denmark international.

Within the story, it’s claimed the former Ajax man is the only player the 13-time European champions are ‘negotiating firmly’ for, as of now. 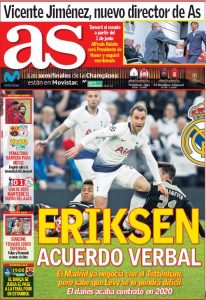 In terms of securing the player’s transfer, the La Liga giants have already done half the work by reaching a ‘verbal agreement’ with Eriksen.

His net salary is €4m with Mauricio Pochettino’s side and that will increase if he makes a switch to the Santiago Bernabeu.

In the past, Real Madrid have signed Luka Modric and Gareth Bale from the north London club and the negotiations have been difficult.

They expect it to be similar for Eriksen as they have already started talks with their counterparts in England.

Earlier in January, AS reported that Tottenham are demanding €25m for Eriksen, which has reportedly come down to €150m. 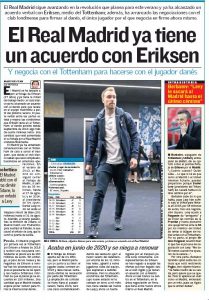 The Spanish capital club are hopeful they can further reduce their summer target’s price tag, but are aware that Daniel Levy will make it difficult for them.