Christian Eriksen’s contract at Tottenham Hotspur will expire at the end of next season.

Wednesday’s edition of Spanish newspaper AS takes a look at his situation at the north London club as he continues to be linked with a move to Real Madrid.

The 27-year-old’s idea is to not sign a new deal with the Premier League outfit, even though the latter’s desire is to tie him down with a renewal.

There are several clubs chasing the former Ajax man, but Real Madrid seems to be his ‘favourite destination’ and his contractual situation will put him in a strong position to make a switch to another club in the summer.

With just over a year left, if Spurs decide against sanctioning his sale, the Denmark international can leave his side as a free agent in 2020 and this key decision, whether to cash in from his sale after the end of the season or retain him, looms over Tottenham chairman Daniel Levy.

AS claims Eriksen’s environment ‘transmit calmness’ about the whole situation. They reported in January the English side are demanding €250m to sanction the Dane’s sale and that price tag has still remained.

Eriksen is not the only option for Real Madrid as they have eyes on Paul Pogba (contracted to Manchester United until 2021) and Miralem Pjanic (contracted to Juventus until 2023). 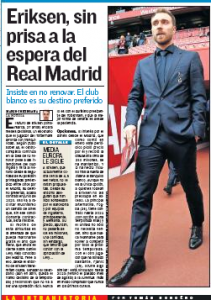 And with his decision to not renew, Levy and Spurs cannot afford to allow a player like him leave for nothing in 2020.

Things will change very quickly if Eriksen decides he rather likes Tottenham, their new stadium, and a (potential) Champions League semi-final, and decides to stick around.