After winning the Premier League 2 for Arsenal last season, the player has now conquered his second title in a row for the Toffees last weekend.

It’s said that the last fixture, played against Brighton, had the eyes of Marco Silva and football director Marcel Brands, who were in the stands.

And O Jogo claims that Everton’s plans are to have Virgínia included in the first team squad next season, where he will have the place of second goalkeeper.

Regardless of where that information comes from, the newspaper also features a short interview with the player himself. The 19-year-old claims that both manager Marco Silva and goalkeeper Coach Hugo Oliveira have been watching him playing. 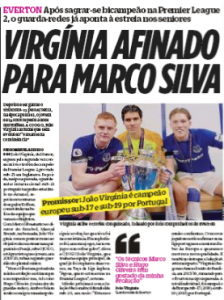 “Marco Silva has enjoyed my evolution and is always following me, just like Hugo Oliveira,” João Virgínia told O Jogo. “They both talk a lot to me and one of the main developments I had was in consistency. An example of this was, in eleven games, to have nine clean sheets.”

About his next goals, Virgínia says: “I now want to make my debut in the Premier League.”

Signed from Arsenal last summer, Virgínia has a contract with Everton running until 2021. And he doesn’t seem to lack ambition around succeeding for the Toffees.

If the goalkeeper is promoted as it’s claimed, then it will possibly mean the exit of 36 year old Maarten Stekelenburg, who has a further season on his contract after this one.