In today’s edition of Spanish newspaper AS there’s a mention of Real Madrid’s interest in Christian Eriksen as the Tottenham Hotspur star is one of the players that has long been on Los Blancos’ radar.

The Champions League winners view the Denmark international as a successor to 33-year-old Luka Modric, who arrived at the Santiago Bernabéu from the north London club in 2012.

Any approach from the Spanish capital club in signing the former Ajax man will not be easy because they are aware of Daniel Levy’s tough negotiating skills.

It’s claimed that a few months ago the 13-time European champions approached Spurs about Eriksen and in response, the English club demanded €250m to part ways the player.

We believe this was told to the La Liga giants during the last summer transfer window and AS claims Tottenham’s response ‘distanced’ Real Madrid from the 26-year-old. 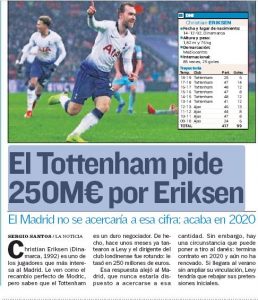 The report claims that Levy will be forced to lower the asking price if Eriksen does not sign a new deal as he has just 18 months left on his contract.

So far, Eriksen has turned down Tottenham’s new proposal to extend the contract.

As ever, Real Madrid are presented as being very wary of getting into a tussle with Daniel Levy.