Manchester City are looking to sign a new centre-back this summer and have already been linked with a handful of players.

Milan Škriniar has long been on the Citizens’ radar, and they even made a €55m bid for him in January 2019, which was rejected by Inter Milan.

Earlier in March, Calciomercato reported that Pep Guardiola ‘doesn’t give up’ on the idea of bringing the Slovakia international to the Etihad.

City’s long-term target was untouchable last summer, but that no longer seems to be the case, according to Gazzetta dello Sport.

‘Things have changed’ radically for the defender, who has struggled and failed to adapt in a three-man defence this season. Last summer, the 25-year-old’s valuation was around €80m.

The newspaper explains the player’s asking price has ‘radically dropped’ to €40-50m, and they also make it clear the Covid-19 crisis has nothing to do with the drop in the valuation.

Gazzetta claim there has been cyclical rumours about City’s interest in Škriniar, and if their ‘interest were to materialise’, Inter could ‘listen and reflect’ to any offer they would receive for the centre-back. 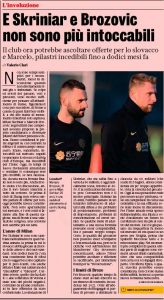 Škriniar’s future at the San Siro beyond this season is under discussion and if there’s a good offer (around €40-50m), Antonio Conte’s side could cash in from his sale and reinvest those funds to ‘reconstruct’ the squad.

It’s worth noting Gazzetta’s report doesn’t specify that Manchester City are still interested in Škriniar. They only state Inter would have a decision to make, if Guardiola’s side try and sign the defender.