Before Konstantinos Tsimikas moved to Liverpool from Olympiacos in the last summer window, he’d been of serious interest to Napoli.

A chance to shine for Jurgen Klopp’s side was just too tempting for the 25-year-old to turn down, despite other clubs surely offering a better chance of regular football.

In his first season with the Reds, the left-back picked up just five minutes of Premier League action, getting a total of 220 minutes in other competitions. He was injured for some of the campaign, but that isn’t the major reason for his lack of appearances.

Getting past Andy Robertson was never a likely scenario.

Napoli have continually been linked with returning for the player, with claims going back to the start of this year. Those claims were brought back last week in Italy, when it was reported Tsimikas has ‘never convinced’ Klopp and that a loan move to Napoli could be a possibility. 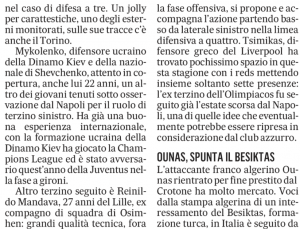 Monday’s edition of Il Mattino, a Naples newspaper, presents the same scenario, explaining the Serie A club would be considering a swoop for the player.

His ‘very little space’ at Liverpool is again seen as a route to getting a transfer deal done.

Klopp’s decision will be key, and that will surely depend on how he feels Liverpool will go forward with back-up at left-back.