Napoli are eyeing up a move for Liverpool left-back Kostas Tsimikas as they look for ‘low-cost solutions’ to a problem in that position.

Gazzetta Dello Sport explain that Napoli need a left-back this summer as the position has had ‘sort of a curse’ for several years.

Ever since Faouzi Ghoulam suffered his first serious injury to his right knee in November 2017, Napoli have not been able to make anything work in the position or on that side of the pitch.

They had hoped Ghoulam could recover, but it seems unlikely, and now the scouting department are looking for long-term replacements.

They’ve already identified several players that could work, but the market is complicated as Aurelio de Laurentiis has decided to block incoming deals if there are not any going the other way first.

They are therefore looking at loan deals, and that has led them to Liverpool defender Tsimikas.

They pursued him before his €13m move to Anfield and have continued to watch as he’s failed to establish himself under Jurgen Klopp, with just seven appearances and five minutes in the Premier League. 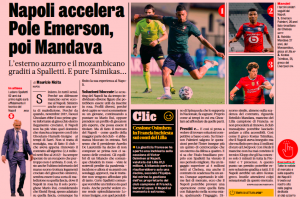 He’s ‘never convinced’ Klopp, and it’s felt at this point a loan ‘could be a solution that everyone would like’.

That would work for Napoli as they’d get a solution at low cost and another Greek Kostas to go with Kostas Manolas, while Liverpool could allow Tsimikas to develop and revalue himself away from the club.

There’s no mention of talks or any movement as of yet, but that could definitely change, and with ‘sensational hits’ unlikely from Napoli this summer, he’s an attractive option.