AC Milan are working to bring Manchester United defender Diogo Dalot back to the club next season, but they need to wear United down first.

That’s what Gazzetta Dello Sport report today, stating that Manchester United are not keen on the deal Milan are currently proposing.

They explain that work is underway at Milan to strengthen their squad for the Champions League next year, and that includes adding a right-back.

They are ‘working’ to bring Dalot back to the club after his loan spell last season when he was with the Italian side on a ‘dry loan’.

Milan want a similar deal, but this time with a ‘right of redemption’, but Manchester United are ‘less willing’ to negotiate than other clubs, such as Real Madrid, with whom Milan are also negotiating a deal for Brahim Diaz. 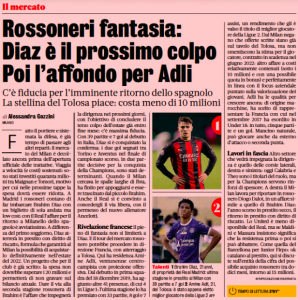 Gazzetta, though, state that if Paolo Maldini and Frederic Massara ‘insist’ on the deal, then Manchester United’s resistance will be broken ‘sooner or later’.

That sounds like overconfidence from the Italian side, with United very unlikely to just sanction a deal they don’t want because Maldini and Massara insist on it.

Work is clearly underway on a deal to get Dalot back to Milan, though, so expect more of these claims in the coming weeks and months.