As things stand, Chris Smalling is returning to Manchester United once his loan deal at AS Roma expires.

The Serie A side still haven’t managed to convince the Premier League side to accept their offers for the England international, and with the deadline to register players for the last phase of the Europa League looming, things aren’t looking good.

Things could, of course, change over the weekend, but unless Roma find a fair bit of change down their many sofas, they’ll have to do without him throughout August.

That doesn’t mean they’ll give up entirely, as Gazzetta dello Sport explain the Italians have kindly requested the player to stand up to the Red Devils in order to help them secure a deal for him. 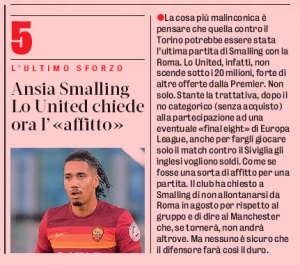 The newspaper say those in charge have asked him ‘to not go too far away from Rome in August out of respect for the group and to tell Manchester United that, if he returns, he won’t go anywhere else’.

With likely offers from elsewhere, that could go a long way, but Gazzetta spread a tiny bit of doubt on it all because despite previous reports stating that Smalling absolutely wants to remain in Italy, ‘it’s not certain that the defender will play hardball’.

West Ham make contact for signing – Sale would be ‘great...

Suggestion Everton have won with negotiation stance – Boost for Toffees...