Barcelona president Joan Laporta’s ‘big dream’ is to bring Liverpool manager Jürgen Klopp to the Camp Nou next summer, according to Sport.

The La Liga side have endured a mixed season, that has seen them win only four league games and one in the Champions League. They are ninth in the league and third in their group table of the European competition.

Ronald Koeman is under pressure, but also ‘maintains the support of the board’, who are aware Barca are having a ‘transitional season’. Unless there is a real disaster, he will retain his job until the end of this term, which is when his contract expires.

Xavi Hernández will always be under consideration at the Spanish club, but their ‘big dream’ will be to appoint Klopp.

He is in his seventh season at Anfield and although the contract with the Reds runs down in 2024, there is a belief the German would finish his cycle soon at Liverpool.

For now, Barca are ‘learning what Klopp thinks about his future’ and the information they receive doesn’t give them hope. The ex-Borussia Dortmund boss is comfortable at the Merseyside club, where he has a winning project. Therefore, he doesn’t open the door to leaving Liverpool. 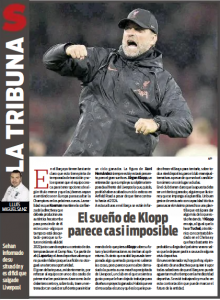 Sport say it will be necessary to see how the season ends and what Barca can offer Klopp, especially sporting wise, to ‘tempt him’.

The Catalan club want a winning coach, who can also get the best out of players. Klopp fits the profile, just like Chelsea manager Thomas Tuchel.

Although Laporta has a ‘big dream’ to take the German away from Liverpool, the newspaper states it ‘seems almost impossible’ to bring Klopp to the Camp Nou.