Prior to his switch to Spain, the Baggies wanted to retain the 16-year-old and offered him a new contract, but he turned it down.

Apart from Barcelona, Paris Saint-Germain were one of the clubs who came close to acquiring his services.

Sport reported in July the youngster travelled to France to undergo a medical with the Ligue 1 winners, but the Blaugrana managed to beat the Paris club for the then West Brom youngster.

Mundo Deportivo also explained Thomas Tuchel’s side were willing to offer €3m to the player’s father to take his son to PSG, but Barry and his mother rejected it to join Barca.

Barcelona board member Silvio Elías is responsible for ‘professional youth football’ and during an interview with Mundo Deportivo, he explained how the club managed to beat PSG to sign the player from West Brom.

“Without a wallet you don’t go anywhere, but there has been a very important work of seduction and conviction,” Elías explained. 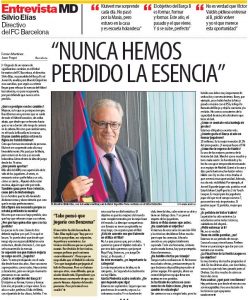 “Barry, for example, had already taken the photo and passed a medical with PSG. He got the call from Barça and left the [PSG] shirt and medical. We’re not unaware of the club’s ability to attract talent.”

Meanwhile, Barca saw one of their young talents, Xavi Simons, leave the club for PSG.

On this topic, Elías said: “There are requests that are unacceptable from the first minute. It was a decision of the technicians that we fully support.”