Bernd Leno signed for Arsenal in 2018, moving to the Premier League big-time from Bayer Leverkusen. Unai Emery’s idea was for the goalkeeper to be eased in over the season, however, an injury to Petr Cech gave him more opportunities than he was otherwise expecting.

With the Chelsea legend having left Arsenal, Leno is absolutely No.1, both in terms of being first choice and now having the shirt he wanted, taken from the departing Cech.

Speaking to SportBild this week, the 27 year old has made it clear just how thrilled he is at the Gunners, and has also said some fan-pleasing comments about rivals Tottenham and Chelsea.

Asked to compare his current club to Leverkusen, Leno said: “You can’t compare that, of course Arsenal is a world club, THE club here in London. Not Chelsea, not Tottenham – Arsenal is the club here with fans around the world. No matter where we are, also in the USA or in Asia, there are many fans of Arsenal everywhere.”

Chelsea finished third last season in the Premier League, beating Arsenal in the Europa League final, and Tottenham finished fourth and got to the Champions League final, but Leno isn’t talking about current or recent achievements, more about the size of the club on the world stage. 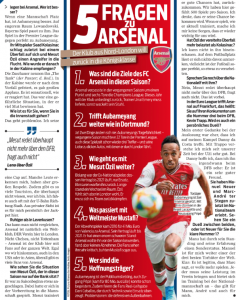 Largely thanks to some of the glory years during Arsene Wenger’s early period with the club, and previous successes, the Gunners have a huge worldwide fanbase, and their current goalkeeper clearly believes that puts the clubs of Mauricio Pochettino and Frank Lampard in the shadows.