Home Europe Coutinho on what makes Klopp ‘unique’, and how he wants to beat...
SHARE

Barcelona allowed Philippe Coutinho to complete a loan move to Bayern Munich in the summer and the Bavarians have the option to make the deal permanent.

The Brazil international arrived at the Camp Nou from Liverpool in January 2018, but struggled to justify the hefty price tag paid by the La Liga winners.

A few days ago, Jurgen Klopp spoke to the German press and said he advised his former player to join the Bundesliga winners.

The 27-year-old has given a lengthy interview to SportBild, during which he was asked about the message he received from the Liverpool boss.

Coutinho said: “He [Klopp] sent me a message and wished me luck. He wrote that Bayern is a big club and the Bundesliga a great league. He is very happy to see me there.” 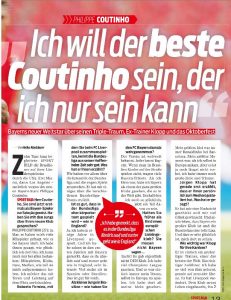 The South American played under Klopp’s guidance at Anfield for over two years and the time he spent under the German was sufficient to leave a mark on the player.

“He’s just a great coach, one of the best of the world. A real leader. I learned so much from him, especially on the mental level. He changed Liverpool. The club breathed new life, made them really strong again. It was an honour to work with him,” he added.

Sport Bild further questioned Coutinho on what makes Klopp so unique, and he explained: “His mentality is unique. He somehow always finds the right words, both before the game and during the game.

“He works very hard and is so extremely focused. The training is very intense. He always manages to adjust you for the next opponent, which is why he is so successful.”

Liverpool won the Champions League last season and on their road to success, they overcame Bayern Munich in the knockout stages. 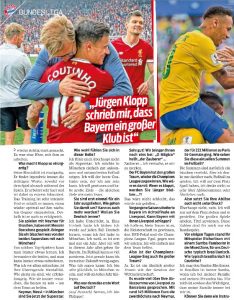 Coutinho was asked if he thinks Bayern can now beat Liverpool with his help, and responded: “I hope so. My dream is to win the championship, the DFB-Pokal and the Champions League. No matter who we play against. I just want to help the team.”