The Baggies offered a three-year deal to the forward, but Sky Sports reported he turned down an opportunity to sign a contract with the Championship side.

He travelled to Paris to undergo a medical with PSG, but the La Liga winners convinced the English club’s youngster to join them.

Over the weekend, the Daily Mail spotted Barry leaving a hotel in Barcelona and even though PSG were expected to secure the deal, there was a change of plans at the last minute.

The Blaugrana have been following the teenager for a long time and convinced him to join them with an ‘attractive proposal’. 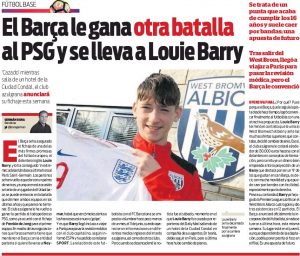 Sport’s report states he decided to end his time with West Brom due to the superior offers he had to changes clubs.

Barca will pay €130,000 in compensation to West Brom and if there are no late twists, the Camp Nou club will make Barry’s signing official this week.