On August 1st, we carried a report from Mundo Deportivo, who claimed that Paris Saint-Germain want Chelsea star N’Golo Kante ‘at all costs’ and, in turn, the midfielder is key for Barcelona to complete the signing of Adrien Rabiot.

According to French newspaper L’Equipe, the Ligue 1 club’s director of football, Antero Henrique, has a ‘dream’ to sign the former Leicester City man.

He even had several contacts and made ‘contractual proposals’ to the player who was a part of Didier Deschamps’ squad that won the World Cup in Russia.

The Parc des Princes outfit’s interest in the 27-year-old is well known, but the FA Cup winners have no plans in allowing the player, who is perceived as ‘completely indispensable’ at Stamford Bridge. 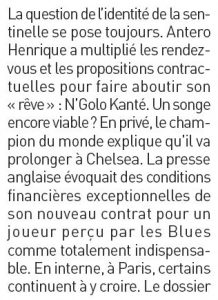 Kante has three years left on his contract at the west London club.

The L’Equipe report claims that ‘in private’ he has expressed his stance on his future, which is to extend the contract with Chelsea. Therefore, the door to bring the midfielder to PSG now ‘seems closed’.