Back in early August, about a week before the end of the Premier League’s transfer window, a story emerged claiming Newcastle were interested in Paris Saint-Germain’s Stanley Nsoki.

The young centre-back, who can also play down the left, was the subject of advances from the Magpies, who were told by the Ligue 1 champions he would cost them €10m for the last year of his contract.

However, RMC Sport, who were the ones reporting the details, explained Newcastle somewhat baulked at the price tag after Rafa Benitez rang Antero Henrique personally, and eventually moved onto Valenciennes’ Sikou Niakaté, which also came to nothing.

Fast forward just over two weeks, and L’Equipe are reporting the Premier League side did, in fact, put a €10m offer on the table for Nsoki, which was seemingly accepted since the matter was then left up to the defender himself. 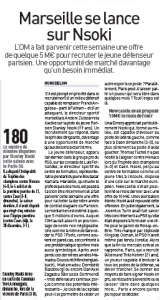 Unfortunately for Newcastle, the 19-year-old then turned down the chance to move to the north of England, eventually going onto start Paris Saint-Germain’s first game of the season, a 3-0 win against Caen.

Weirdly, L’Equipe state this offer arrived ‘last month’, meaning it would have been presented before RMC Sport’s report that the Magpies were put off by the €10m demands.

Yet to renew, the defender is now a target for Marseille, who are said to have offered €5m + a percentage of a future transfer fee for his services.

Certainly less than Newcastle’s offer, but that price tag always seemed a bit high for the final year of a youth contract.

Everton one of the clubs ‘sounding out’ Barcelona over wideman –...