Monday’s edition of L’Equipe had an article on Celtic’s Odsonne Édouard and how he’s becoming increasingly important for the country’s U21 side.

Transfer interest from AS Monaco was covered, with the French newspaper explaining the 21 year old wasn’t too disappointed at missing out on a move away from Celtic, because he knew he could keep his star rising in his own country by impressing when on national team duty.

L’Equipe were looking forward to Monday’s match against Czech Republic, which Édouard was expected to start having come on as a substitute against Albania in the 73rd minute and still scoring twice.

Édouard again scored twice, and it’s explained the U21 team has been ‘driven’ by the Celtic player during this international break. After the great cameo against Albania, L’Equipe say he showed ‘calmness and accuracy’ by doing the same again. 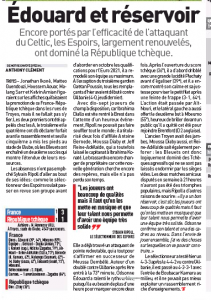 Sylvain Ripoli, manager of the French U21 side, is quoted as saying: “Odsonne confirms his talent and we have options at that level.”

Now the manager wants his experienced team to gel and reach the peak of their collective abilities, and surely Celtic’s rising star will be a big part of that.