Brighton & Hove Albion and Southampton have been credited with an interest in UD Almería’s Darwin Núñez, who finished his debut season in Europe with 16 goals and two assists in the Segunda División.

Three days ago, Calciomercato.it reported the La Liga 2 side rejected offers from Southampton, Brighton, VfL Wolfsburg and Benfica for the striker.

It was also explained that all these clubs are ‘ready to return’ with ‘new proposals’.

Monday’s edition of AS explains Brighton emissaries met the Spanish club’s representatives over the weekend to discuss signing the Uruguay international.

It’s claimed Graham Potter’s side tabled a new offer of €25m plus bonuses, a week after making a proposal of €18m plus €7m in variables, which was most likely rejected.

Benfica have also made a similar offer of around €22m and included some of their own players as part of the deal. However, Almería would prefer ‘money over footballers’.

In addition to this, the Portuguese side prefer to pay the transfer fee over a period of five years, while the Spanish club are looking at a ‘maximum [period] of 24 months’. 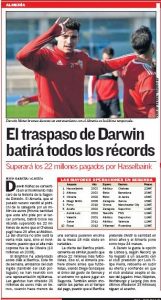 This gives an advantage to the Premier League club and according to AS, Brighton have ‘overtaken Benfica in these days’ to sign Núñez.

AS add the South American is set to become the most expensive sale in the Segunda División, surpassing the €22m Chelsea paid Atlético Madrid for Jimmy Floyd Hasselbaink in 2000.