Kepa Arrizabalaga returned to Chelsea’s starting lineup in March after Frank Lampard made the goalkeeper sit on the bench for over a month.

Although the Spain international has regained his place in the last two matches, the Blues continue to be linked with other goalkeepers. Four days ago, AS reported the west London club ‘dream of signing’ Atlético Madrid’s Jan Oblak.

There has also been claims of Chelsea interest in Marc-André ter Stegen. Earlier this month, we relayed news from Spain that Barcelona are ‘very calm’ despite reports of Chelsea wanting the German.

Tuesday’s edition of Sport claims there was ‘speculation’ of offers from Chelsea, Juventus and Bayern Munich, but Barcelona’s priority is to renew the 27-year-old’s contract. His current deal at Camp Nou lasts until 2022.

It’s claimed negotiations between Ter Stegen and the La Liga winners continue at a steady pace and the former hasn’t hidden that he’s happy with his life in Barcelona, both on and off the pitch. 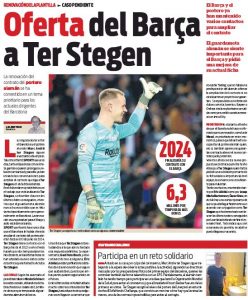 Barcelona want to extend the player’s contract until 2024. Ter Stegen’s agent Gerd Vom Bruch and the Blaugrana’s technical secretary, Éric Abidal, are outlining the details of a contract extension.

There’s belief it will ‘surely end well’, since both parties want to continue together.