Kepa Arrizabalaga was forced to sit on Chelsea’s bench for more than a month after Frank Lampard preferred Willy Caballero ahead of the Spain international in February.

The former Athletic Club Bilbao man returned to the starting lineup in his side’s 2-0 win over Liverpool in the FA Cup last midweek and he also featured in the Blues’ 4-0 victory against Everton in the last league tie.

Although the 25-year-old has returned to action, the west London club are looking to bring in a new goalkeeper in the summer.

The Slovenia international was one of the standout players in Atlético’s latest success against Liverpool in the Champions League.

Diego Simeone’s side overcame the Reds to seal a berth in the quarter-final of the competition and Oblak made nine crucial saves at Anfield. 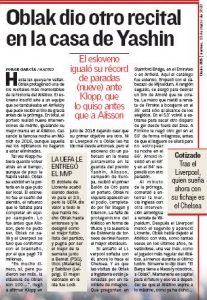 The newspaper talks about how Jürgen Klopp wanted Oblak before Liverpool signed Alisson Becker from AS Roma in 2018.

After the Merseyside club’s manager wanted Oblak in the past, Chelsea ‘now dream of his signing’.

Should Chelsea manage to bring in Oblak, Kepa would be demoted to the bench or move elsewhere.