Another day, another update in the Nicolo Barella to Chelsea story, following Tuesday’s claim the Blues would be willing to slap £55m on the table for the Cagliari starlet.

Already capped by Roberto Mancini, the 21-year-old has become one of the most talked about players in the Serie A in recent weeks, and if the rumours are to be believed, it’s the Blues who are pressing the most to get something done.

Some of the reports have been conflicting, with outlets believing Marina Granovskaia could make the decision between Barella (Maurizio Sarri’s favoured choice) and Leandro Paredes for her manager, but that hasn’t stopped Gianfranco Zola from doing his bit on the side regardless.

Aware of the youngster’s talent back in 2014-15 when he gave him his debut in the Coppa Italia as Cagliari manager, the Chelsea assistant manager has kept in touch with his former protégé, even more so in recent days. 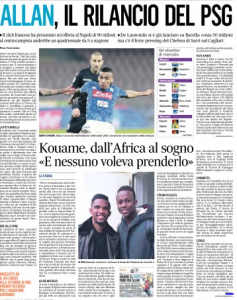 According to Il Mattino, there have been ‘various phone calls’ between Zola and Barella over the past few days, clearly with the aim of convincing the Cagliari man that a move to Chelsea would be what’s best for him in January.

Still, until €50m are put in front of the Serie A side’s president, we’ll never know how strong their ‘we won’t sell midway through the season’ stance really is.