Ecuadorian outlet Diario Expresso brings a story saying the player has agreed his return to Emelec, who he played in the youth levels.

The winger has been posting many teasers on his Instagram account, and the outlet claims they’re all about his return to his home country.

Arce was actually having a loan spell at Spanish side Extremadura until the end of the season, so Brighton have probably cut short their deal with the second division club. 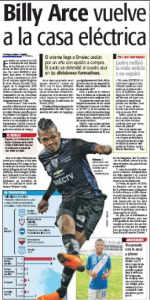 Interestingly, Diario Expresso says Arce is arriving for the ‘2019 season’. So it sounds like he would spent the whole year in Ecuador, although they don’t make it clear.

Arce was signed by Brighton from Independiente Del Valle in a €860k deal last summer, but was immediately sent out on loan.

His contract with the English club runs until 2022.