A few days ago, we covered the Italian stance on how Roma’s alleged interest in Morgan Schneiderlin was being perceived.

The bottom line was, the only way the Serie A side would be able to pull it off was via a loan, and it remained dubious whether that’s something Everton would be interested in.

Fast forward to Tuesday evening, and TuttoMercatoWeb claimed that on top of the Frenchman, Roma had enquired about Arsenal’s Mohamed Elneny, who appears to have been somewhat forgotten by Unai Emery since the arrival of Lucas Torreira and Mattéo Guendouzi.

Corriere dello Sport picked up on this in their Wednesday edition, and while they don’t deny the story, they do, however, provide an update. 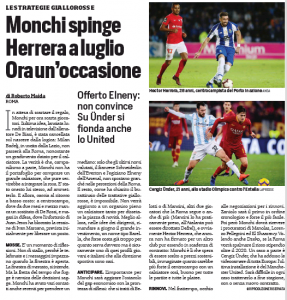 Much like Morgan Schneiderlin, the Egypt international hasn’t really ‘convinced’ Monchi after he was offered to him, which the outlet put in nicer terms: neither have ‘shifted Roma’s perceptions that much’.

The idea would now be to wait until June and make a move for a big, more expensive name, like Nicolo Barella, and not Elneny.

The 26-year-old has only made eight appearances in all competitions, mostly coming in the Europa League, featuring just once in the Premier League for just 59 minutes, in the 3-1 win over Burnley.