Over the past few weeks, the idea that Arsenal could make a serious move for Paulo Dybala has been hovering in the Italian press.

It was claimed the Gunners had reached out to the player’s agent regarding a potential free transfer, and while no serious offer has been made yet, it was a thought that seemingly crossed Edu Gaspar’s mind.

This is pointed out once more by Corriere dello Sport on Thursday, who explain that two clubs in the Premier League ‘have moved’ for the Argentine, with those being Arsenal and Newcastle.

It falls in line with what has been said before, but neither have ‘gone beyond the show of interest’ for now.

Down the player’s end, Dybala is ‘still cold’ about his decision, and this ‘despite the fact he prefers to leave Italy’, giving the Gunners a boost in the process. 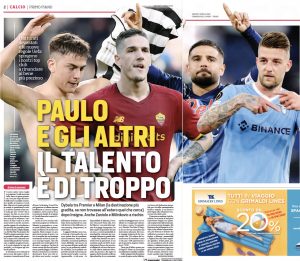 As for Arsenal in all this, qualification for the Champions League could help them in their endeavour, allowing them to supersede the likes of the Magpies and Tottenham, since they would have elite European football on offer.

This something to keep in mind as Mikel Arteta’s side try and make the most of their games in hand, even after their recent surprise 3-0 loss to Crystal Palace.