Home Premier League Arsenal Arsenal in picture for defender as Tottenham back away from deal –...
SHARE

For the past month or so, the chase to sign Takehiro Tomiyasu from Bologna has been spearheaded by Tottenham and Atalanta.

However, the Cristian Romero deal slowed things down for both clubs, and with the Argentine now seemingly on his way to Spurs, a door has opened for Arsenal.

That’s according to Corriere dello Sport, who report that Tomiyasu ‘would have preferred the Premier League’ to Serie A.

While Tottenham and Atalanta failed to convince Bologna with their offers, ‘right now, the Japanese is liked by Arsenal and a couple of other English clubs’.

In the background, it’s stated Tomiyasu’s entourage is ‘working day after day in an attempt to get him to play in that league’, whether it be to the Emirates under Mikel Arteta, or somewhere else. 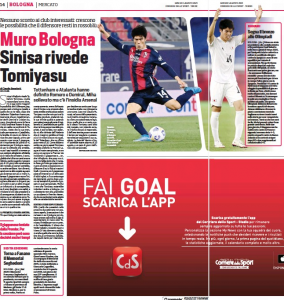 That being said, the versatile defender ‘would also gladly stay in Bologna, but it is equally true that he would like his arrival in the Premier League, believing that he is particularly suited to its technical characteristics’.

There is no deadline as of yet, but it’s stated that could end up being ‘around August 20th’, a couple of days before the start of the league.