With Hector Herrera running out of contract with Porto at the end of the season, there are daily stories about his chance of signing a new deal or heading to a new club.

In case of a move, it’s Serie A that looks like a more likely destination, with the Italian press always reporting the interest from Roma and now Inter Milan.

But the Portuguese press loves including a few Premier League sides in the race. It had been mainly Tottenham in the past month, but now Record brings a longer list.

Even though their story is about the ‘Italian war’ for Herrera, they don’t miss the opportunity to say that the interest from Arsenal, Crystal Palace and Spurs is ‘known’ in England. 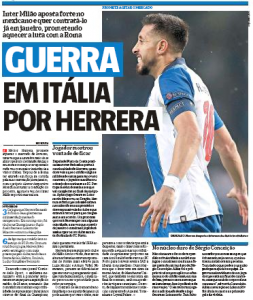 All three of them have been linked to Herrera before, but the stories were never strong enough for us to make a big deal out of it.

Even this time, Record treats it as some additional info for a player who’s probably going to Italy or staying in Portugal.

Herrera has been doing pretty well captaining Porto this season, and there’s no doubt many clubs will go for him, no matter if he leaves for a fee in January or walks in June. But until we see a story with more details about the interest from Premier League sides, we’re not buying that.