The Spanish club had called him in for a meeting, and with claims in the country’s media he was planning another La Decision video, the story goes that he was forced to confirm his intentions.

So, looking slightly like he was being kept hostage in a bathroom and forced to record his goodbye, Griezmann got straight to the point. Yet he didn’t reveal where he’s going.

That, in itself, isn’t strange. It was an Atletico video and would have seemed a bit self-obsessed, even for the Frenchman.

Barcelona has been the assumed destination, with the Catalan media reporting for months that Griezmann regretted turning the club down last summer and had been offered for a second chance.

Off he’d go, quickly, to the Camp Nou and everyone would live happily ever after.

But that isn’t the slant the Catalan media is putting on things. The transfer is considered very possible, and that’s reported, although it’s alongside insistence there’s nothing agreed. 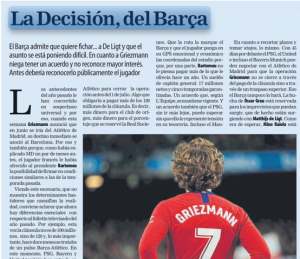 Both Sport and Mundo Deportivo have opinion pieces on the player today, and both of those are headlined La Decision, showing the impact that video still has.

Mundo kick off their article by stating: ‘Barça admits that they want to sign… De Ligt and that the matter is getting difficult. As for Griezmann, they deny having an agreement and do not recognise any interest. Before the player should recognise it publicly.’

That means he’s expected to come out and say he wants this specific move. Barcelona are still unhappy they were so publicly snubbed last year, and further unhappy the price would now be €120m, rather than the €100m it was.

Sport go a lot further, and their article is outright against the signing: ‘To sign Griezmann is to end any show of respect for the colours. It is to become PSG, to become a club that cares little for everything that has nothing to do with money and to win. Win at whatever price. It is taking the shovel, digging a hole and burying everything that smells of those values.’ 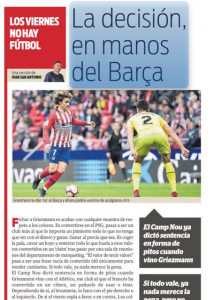 They believe it’s ‘unacceptable’ to watch the player ‘laugh’ at his current club, having committed to them less than a year ago.

Sport end their article by saying: ‘To sign Griezmann is to make the arrogant child who jokes about his classmates the captain of the school team. The decision, now, is in the hands of Barça. And, unlike the Frenchman, it is not permissible to make a mistake.’

This could all get very entertaining.