There were so many transfer news yesterday that you may have missed this one. But apparently, Manchester United can have another chance to sign Umaro Embalo from Benfica.

The Red Devils, who were said to have an agreement to buy the player and later had their interest revealed by the agent, seemed close to the teenager a few months ago, until RB Leipzig showed up.

The German side were ready to pay over €15m for the 16-year-old, and that’s when Manchester United left the race.

But there’s a change: Leipzig couldn’t sign him before the transfer window closed.

The Portuguese media have been claiming that the club wouldn’t accept demands made by Embalo’s agent Catio Balde, with some outlets saying that the salary and commission were not matched by Leipzig. 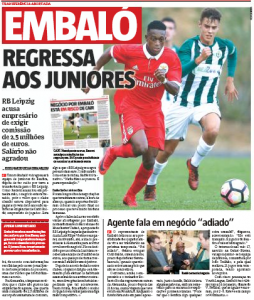 Embalo and Balde returned to Portugal last night, and the agent had a word with a couple of media outlets. Speaking to Record, all he said was that the deal was ‘postponed’.

But he also talked to Radio Renascença, in an interview which was covered by O Jogo. In one of the quotes, he left the possibilities open, claiming that “there’s always an open door, he’s a player of much market and a lot of demand”.

Regarding the salary, Baldé said that “there wasn’t an agreement over the economical project, there was a too big difference”.

Could Manchester United still meet his demands? Rumours from Germany claim that the agent wanted a €2.5m commission. Not huge for a club like United but still a lot for a 16-year-old.