On Saturday we covered claims from Portuguese newspaper A Bola that Sporting have filed a complaint with FIFA over Rui Patricio’s transfer to Wolves.

Disputing his free agent status, after the goalkeeper rescinded his contract, Sporting are claiming the value of Patricio’s termination clause, which was €45m, plus the remaining value of his wages in the contract.

Correio de Manha have it differently, although they agree with the claim that a process to test the legalities of the transfer has been initiated by Sporting. The amount the second newspaper has is €57m.

It’s explained there has been talks between the clubs to try to come to an agreement over a fee, but those talks haven’t been going smoothly. Correio de Manha says there’s been ‘advances and retreats’ and that’s how everything ends up where it is. 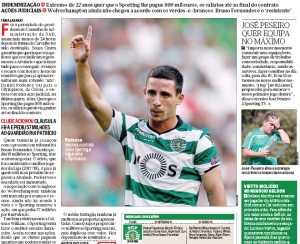 Neither club will relish this going down the legal route, and therefore a settlement would appear to be in everyone’s interests.

A lot could depend on Jorge Mendes and what Gestifute expect, with Sporting owing them money from previous transfers.