There’s a claim in the French media that Metz defender Moussa Niakhate has turned down the chance to sign for Huddersfield Town.

The young Frenchman has been linked with a number of clubs this summer, but it’s looking likely he will sign for Bundesliga side Mainz.

L’Equipe report Huddersfield Town, along with Serie A side Torino tabled a ‘great transfer proposal’ for the 22 year old defender, but he’s decided to continue his career in Germany.

It’s reported Mainz will be paying between €6m and €8m for Niakhate, which will tie him to the German club for five years. 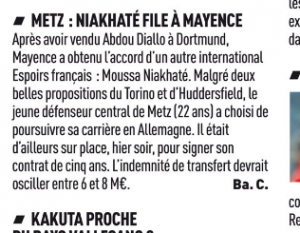 This could come as blow to Huddersfield Town as they look to strengthen their squad ahead of next season. The West Yorkshire club will be looking to consolidate their place in the Premier League after their debut season in the top flight.

The Terriers have already made Terence Kongolo’s move permanent this summer but  David Wagner will likely be looking for more.