Over the past few days, the story linking Yerry Mina with a move to Everton has grown.

At first it just seemed a rumour built on World Cup giddiness, but the Catalan media have insisted they’ve had Everton interest confirmed as genuine to them.

The same wasn’t said about links to Liverpool, so there was clearly a difference.

It’s claimed that in the past few hours, the Premier League club have made contact about signing both defender Mina and striker Paco Alcacer.

The former Valencia player was widely expected to leave Barcelona this summer, but the failure of the Antoine Griezmann transfer means he could stay, that’s if an attractive offer 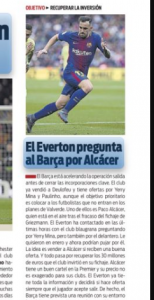 for the player and club doesn’t arrive.

Barcelona want around €30m for Alcacer, and it’s stated Everton have even planned a meeting with the player’s entourage for next week.

The Toffees want to find out when the Spaniard’s intentions are, before making a potential offer.