Raúl Jimenez’s injury during Wolverhampton Wanderers’ match against Arsenal on Sunday has received coverage around the world’s sport media, with the player’s own country Mexico obviously giving the case even more attention.

Monday’s issue of newspaper Record only reported what happened with the striker, and now that they have more information, the Wolves star is featured on their front page today.

Following the success of Jimenez’s surgery, the outlet takes the statement from Wolverhampton and player to say he’s now recovering and ‘already wants to come back’.

The newspaper managed to interview Doctor Carlos Ramirez, who’s a specialist in neurology, and spoke a little about Jimenez’s case.

“It depends if the fracture was complicated or not, this means if the bone sank, if the bone generated some type of tear in the meninges, if some type of bleeding was generated within the brain and all these variables are important to know to see what kind of repercussions he can have.” 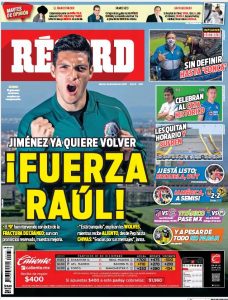 “Once this inflammation is removed, the bone is well consolidated and the inflammation process has completely withdrawn, some repercussions are generally not seen and activities such as heading a ball or playing football at a professional level can be resumed.”

Record recalls other cases such as Ryan Mason, Christian Chivu and Petr Cech explaining how each of them went, besides bringing an image to show what happened to the Wolves star. 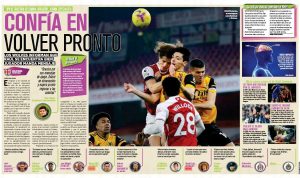 The newspaper also feature quotes from personalities throughout world football, along with messages from the Mexican national team and Jimenez’s former club Chivas.

There’s clearly a lot of concern in Mexico, but hope too, to add to that coming from Wolverhampton.