Newcastle United are one of the clubs interested in Real Madrid’s Eden Hazard, according to Mundo Deportivo.

The 30-year-old has spent repeated time away from the pitch due to injuries since arriving in Madrid in 2019. When given opportunities, he has struggled as the forward managed only five goals and nine assists in 53 matches.

Hazard is yet to find the back of the net this term from 10 matches and there are other players currently ahead of him. This was confirmed by Carlo Ancelotti.

The Belgium international could leave the La Liga giants either in the winter market or next summer, if there is no improvement in his situation.

When discussing suitors, it’s said there is interest from the Premier League. The Magpies are tagged as Mundo state there are top clubs keen, ‘without forgetting Newcastle’, who were recently acquired by Saudi Arabia’s Public Investment Fund.

If Hazard wants to leave, Ancelotti will ‘not pose many problems’. Real Madrid, for their part, will not see be against the idea of a move. 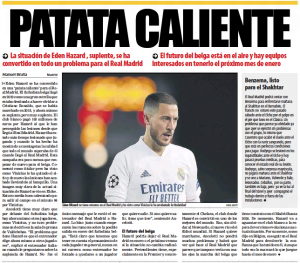 For now, the former Chelsea star is ‘going to hold on’ to his position in Madrid and see how things will evolve for him.

Should Hazard decide to change clubs, both his manager and Los Blancos are unlikely to stop him, especially since he has ‘become a real problem’ for Real Madrid.