Manchester City allowed Joe Hart join West Ham United on a season-long loan deal last summer and he will now return to the Etihad after successfully (partially) completing a year with the London club.

This leaves new West Ham manager Manuel Pellergini with Adrian as his main goalkeeper in the squad. It is no surprise that the Chilean will look to sign a new stopper in the summer transfer window.

According to AS, the Hammers have identified Espanyol goalkeeper Roberto Jimenez as the transfer target. He is the “leading candidate” for West Ham in the goalkeeping position.

Jimenez started in 34 games in the La Liga for Espanyol last season, despite the club signing Diego Lopez last summer. The Madrid-born keeper’s contract at RCDE Stadium runs down in 2019. 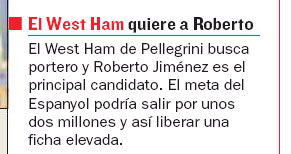 The report claims that Espanyol could sanction the sale of Jimenez, if they receive a bid of about €2m. The price tag should not be an issue for West Ham if they are genuinely interested.