Boavista forward Alberth Elis is in the ‘crosshairs’ of West Ham United and Southampton, according to A Bola.

The 25-year-old completed his first full season in Europe’s top five leagues last term and he finished it with eight goals and seven assists in 31 league matches.

It’s claimed the Honduras international is ‘likely to leave’ the club this summer and he’s not short of suitors.

The player has expressed his dream of playing in the Premier League, and in April, Brighton & Hove Albion and Watford were closely following him. Graham Potter’s side and the newly promoted Premier League club are not ruled out from starting formal talks to sign the attacker. 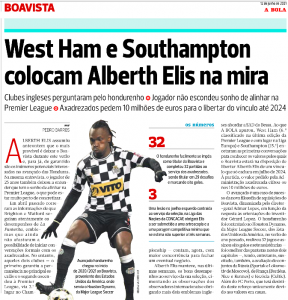 However, these two sides will now face ‘great competition’ form the Hammers and Ralph Hasenhüttl’s side.

Both West Ham and the Saints have initiated talks to know the fee Boavista need to sanction Elis’ sale.

According to the report, the Portuguese club ‘requested’ around €10m to allow the player to leave this summer.