Fiorentina could make a move for Arsenal midfielder Lucas Torreira this summer, having been interested in him for some time.

That’s according to Corriere Dello Sport, who say that the idea of a move in this transfer window cannot be ignored.

They explain that Fiorentina are keen to bolster their midfielder in this window and are eyeing a couple of signings to do just that.

Sergio Oliveira is at the top of their list, but he is not the only profile they are considering, and there is a list of several possible targets.

The Italian side are ‘constantly working’ and ‘continuing to look around’ at who may be available and want to have several plans and several different options, so they are not caught out.

That is where Arsenal’s Torreira comes into the mix. He is a player that they have ‘always liked’ and he has been linked to the club on several occasions in the past. 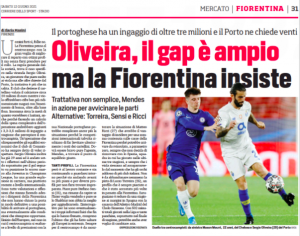 He’s returning to Arsenal from a loan spell with Atlético Madrid and has made it clear he wants a move away from the Emirates this year.

His preferred destination would be Boca Juniors, something he has made clear on more than one occasion, but that is a hard deal to get done.

Thus Fiorentina could offer him a return to Italy and the ‘change of scenery’ he is clearly craving.