On Tuesday, we’ve covered a story from Record which claimed William Carvalho should be leaving Sporting CP in a month.

The reported claimed he would be heading to the Premier League, even though they didn’t know to which club. But for that to happen, Sporting need to receive an official offer first. And as reported by O Jogo today, the Portuguese club have no bids on the table. 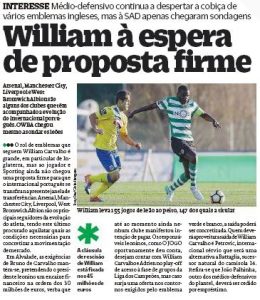 They claim that Arsenal, Manchester City, Liverpool and West Brom are the main clubs following the player’s evolution, with Tony Pulis’ side getting a special mention for trying to find out an asking price from Sporting.

According to O Jogo, Sporting want to count on the player for the Champions League playoffs, but in case West Brom, or anyone else, shows up wanting to pay the €30m demanded, they will accelerate the process and let him go.

But nobody has offered that yet, West Brom included, so the never ending William Carvalho transfer saga continues.