‘The player is leaving for England, even though we don’t know to which club’. We’ve seen this kind of information coming several times from the Portuguese press. In some cases, the player did move to an English club, although most of the time the transfer never happened.

That’s how Record is treating the situation of William Carvalho today. They have a really big story saying Sporting are sorting the final details of a transfer to the Premier League.

Carvalho is leaving after the Champions League playoffs, as demanded by manager Jorge Jesus, and the club who will take him to England will be spending something close to his €45m release clause, with bonuses included. 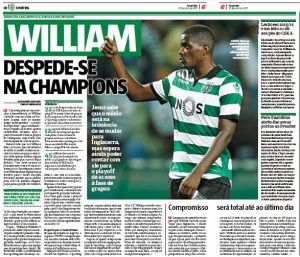 Carvalho has been linked to so many English clubs that it’s hard to even guess who would take him this summer. From the latest clubs to be linked, Arsenal were said to be back, and West Brom seem to never really give up on the midfielder.  There’s also Manchester City, whose interest was reported because his agent is Pep Guardiola’s brother Pere, although the story doesn’t make much sense.

But again, that’s only a guess. Let’s see if the Portuguese press comes up with something new in the next few days or just ignore the story. Record are known for having good sources at Sporting and wouldn’t report this departure in case they weren’t certain, but you never know.

West Brom and Arsenal are the current favourites for the Portuguese press. That could be for no other reason than West Brom making an attempt last summer, and Arsenal the summer before that, with Tony Pulis talking about the player obviously helping things.