Told back in January by Antonio Conte that he was free to leave Chelsea in the summer, Diego Costa is in a bit of a pickle because the club he wants to join can’t actually buy him until January.

Desperate to team up with Diego Simeone once again at Atlético Madrid, the Spain international also cannot be expected to spend the next six months hanging around the La Liga club’s training ground, meaning a solution needs to be found before a deal can be done.

One rumour doing the rounds was that AC Milan could take the Chelsea forward on loan for the first six months of the season before sending him back to Madrid in January.

This, however, doesn’t seem like it will happen, mostly because the Serie A side’s CEO, Marco Fassone, made it clear they weren’t the kind of side who did six month loans. 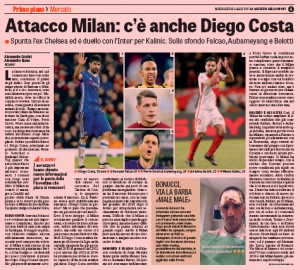 No, they’re the kind of side who do two-year loans with a view to buy afterwards.

That doesn’t mean their interest in Diego Costa is non-existent, far from it.

After all, Fassone and co. did allegedly travel to London recently to conduct some ‘transfer business’.

Gazzetta dello Sport on Wednesday explain that Milan’s need for a new striker means overlooking the Chelsea forward would be foolish, but they’re fully aware convincing him to join them rather than Atlético will be difficult.

Still, they haven’t given up, and the Italian newspaper state a new attempt to buy the 28-year-old is certainly a possibility before the end of the transfer window.

Maybe they can do a one-year loan? That’s a compromise, right? It’s more than six months but less than two years.