A couple of days ago L’Equipe reported West Brom’s ‘concrete steps’ to sign Steve Mounie. The 22 year old Montpellier striker was also said to be attracting interest from Fulham, who had previously been interested during the January transfer window.

In their Saturday edition, L’Equipe report that Watford have now made an approach to sign Mounie, not making it clear whether that approach was direct to the player or to his club.

Fulham are mentioned, with it being stated the London club offered €6m during the winter window, but obviously couldn’t get a deal done.

Strangely, perhaps very strangely, West Brom don’t even get a mention. Not a word, L’Equipe don’t send a single nod towards their own reports just two days ago.

There’s every chance that someone in France is pushing the idea of interest in Mounie, 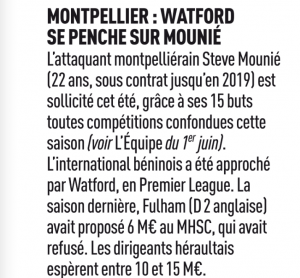 and trying to flush out any genuine interest they can.

So far the only constant has been Fulham, even if L’Equipe have now, in two articles in two days, put both West Brom and Watford ahead of them.

Montpellier want €10-15m. Maybe they’re panicking, because on Thursday they wanted something in the region of €15m.