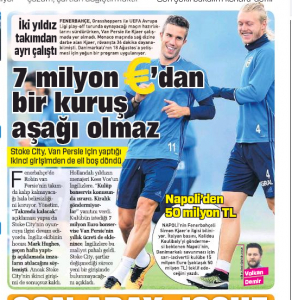 Stoke City still have a little interest in signing Robin van Persie, as long as conditions are favourable, that’s what Turkish newspaper Sabah report in their Tuesday edition.

It was reported around a week ago that there was some sort of interest from Stoke City and their manager Mark Hughes, but a step back was taken because of the big cost of a move.

Van Persie is on high wages, which may not be too much of a problem, especially giving the coverage he’d bring.

However, with a Fenerbahce contract until June 2018, the Turkish club would require a transfer fee. Adding high wages, and a multi-year contract, to a transfer fee for a 33 year old isn’t so attractive.

Fenerbahce aren’t keen on a loan idea, and something will have to give to make this viable. That could either be Van Persie pushing hugely for an exit, or Fenerbahce being distracted by another player and wanting the Dutchman’s wages gone to pay for him.