Brought in during the January transfer window by Sabri Lamouchi for a fee of around €2m, Nuno Da Costa didn’t really have much of an impact at Nottingham Forest.

The striker managed just four starts for the Championship side during the second half of last season, failing to find the back of the net in the process and managing to pick up one assist, in a 1-1 draw away to Preston North End.

The 2020-21 campaign didn’t get off to a much better start for the Nottingham Forest man, as he featured twice in the opening four games before being sent on loan to Royal Excel Mouscron in Belgium.

There, however, things have turned around nicely for the Cape Verde international, as he has scored twice in five appearances, including the second in a 3-2 win over Sint-Truiden at the weekend.

Nord Éclair in Belgium look at how Mouscron’s new signings have coped since their arrival, and a fair amount of praise is given to Da Costa. 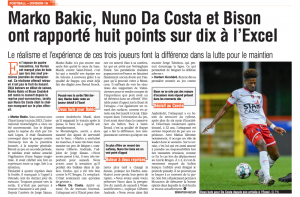 Described as a ‘true fulcrum’ in attack, he’s also a ‘fox in the box’, as he showed for his first goal for the club against KRC Genk.

Furthermore, they feel he’s ‘clairvoyant’ in how he operates on the pitch and is ‘gifted’ in holding the ball up.

His ‘shot quality’ was the difference against Sint-Truiden, and him being taken off a few minutes later ‘changed the game’, but not in a good way, as the team ‘appeared to have lost their reference point’.

As you can see, it could just be a matter of how Nuno Da Costa was used rather than his technical attributes that let him down at Nottingham Forest, and with a contract at City Ground until 2023, there is still time for him to turn things around.

If Chris Hughton will have him, of course.