Home Europe Tottenham will find out ‘in coming weeks’ if talks with 18-year-old can...
SHARE

While a lot is being made in the European press about Mauricio Pochettino’s future at Tottenham, the Argentinean manager appears to be calmly and quietly trying to get transfer business done at the London club.

Since last December, Spurs have been linked with a move for Barcelona youngster Marc Cucurella, whose contract with the Spanish club runs out at the end of the season. 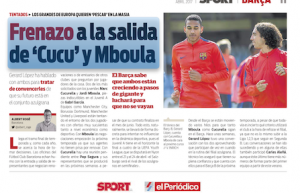 Despite him being free to talk to other clubs, the player has refrained from doing so as he awaits his current club’s renewal before making his mind up.

Tottenham is certainly an attractive destination for most players these days, especially with the prospect of playing under Pochettino, but it appears the staff at White Hart Lane will have to wait a little bit longer before finding out if they stand a chance.

According to Sport on Friday, Barcelona are expected to hold talks with the youngster, more commonly known as ‘Cucu’, in the coming weeks about his renewal.

If they go well, clubs will be able to wave him goodbye, but if they don’t, we might have a three-way battle between Tottenham, Everton and Borussia Dortmund for the 18-year-old.

Let’s wait and see what happens.