Every month, Le10 Sport’s magazine edition has one big transfer story, one that overshadows the rest, and it tends to involve a Premier League club.

Normally, it’s something to do with Paris Saint-Germain and Philippe Coutinho, but April’s edition sees the subject change to N’Golo Kanté, currently in his second season in the Premier League, moving from Leicester City to Chelsea in the summer.

Having another great campaign, the 25-year-old has even been described by some as the best midfielder in the world, and for him to be linked with another transfer isn’t all that surprising. 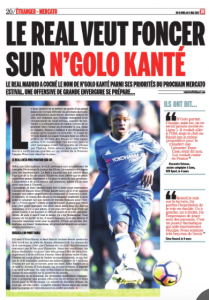 Le10 go all the way with this one, claiming that Real Madrid have made Kanté one of their top targets for the summer, and have let their interest be known to Chelsea, who, shock horror, aren’t interested in selling.

Antonio Conte loves the tireless midfielder, and it would take a lot to convince him to let his star go, which Le10 reckon would equate to a €50-60m bid.

Chelsea apparently would have to accept that, for Financial Fair Play reasons, something we don’t quite believe, and considering Kanté isn’t in the ‘Eden Hazard’ bracket of players at Stamford Bridge, the Blues would consider it.

Quite frankly, we don’t see it happening, especially since Zidane already has a player like the Frenchman in his side in Casemiro, who has emerged as the ideal defensive midfielder for the France ’98 World Cup winner.

This is one of those stories you can gently chuckle at, and move on from to better things.