Home Europe Tottenham player reveals Fulham incident made him realise the need to be...
SHARE

Tottenham Hotspur goalkeeper Hugo Lloris enjoyed a good summer as he won the World Cup with France and he is his country’s second captain to lift the prestigious trophy.

After winning the FIFA tournament in Russia, the 31-year-old’s wife suggested he would be much cooler while on the pitch. His first competitive match as a World Cup winner was Spurs’ 2-1 win over Newcastle United, followed by a 3-1 victory over Fulham at home.

Against the Cottagers, Aleksandar Mitrovic scored the equaliser for the visitors in the second half before Kieran Trippier and Harry Kane extended the north London club’s lead.

When the score was 1-1, Lloris reveals he was boiling and used that situation as an example to stress that being just “good” is not enough. 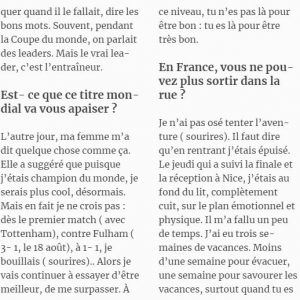 “Recently, my wife told me something like that. She suggested that because I was a world champion, I would be cooler from now on,” Lloris told L’Equipe.

“I did not believe it. Against Fulham, when it was 1-1, I was boiling (smiles)… I wanted to continue to try to be better. At this level, you are not here to be good: you are here to be very good.”

Mauricio Pochettino’s side will face Manchester United in the next league clash and It should be seen whether Lloris would be “very good” for Tottenham in order to help his side seal three points against the Red Devils.