The Tottenham Hotspur goalkeeper has revealed the Manchester United midfielder was told to “focus on the team” so that he can be at his best at the FIFA tournament in Russia.

Both the players were part of Didier Deschamps’ side that lost the 2016 European championship, which was hosted by their country. Since then, the 31-year-old went through a difficult phase because he and his teammates were heavily criticised after losing to Portugal in the final.

This has resulted in Lloris and his compatriots showing their fighting spirit and come together as a team to win the World Cup. The Spurs custodian stressed that Pogba was rewarded for his dedication, just like every other member.

“The last two years were not easy. We have often been heavily criticised [for failing to win the Euro 2016]. Right or wrong, but we took it as a challenge,” Lloris told L’Equipe.

“It’s been shown that the French player had a personality and that we were stronger together. If not, we would have knocked out of the group stages of the World Cup. There were players on that plan.”

“For example Paul [Pogba]. We always told him to focus on the team, and he couldn’t have done better than what he did during the World Cup. He has been in the service of the team from the beginning to the end and he has been rewarded. We were all rewarded.” 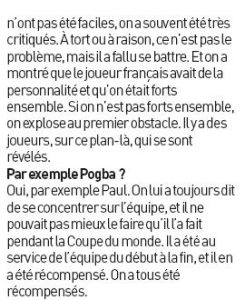 United fans would be hoping that Pogba could replicate his World Cup form for his club, especially after he admitted that his attitude was not right following his side’s defeat to Brighton.