Gazzetta dello Sport‘s Wednesday edition has ‘DIVORCED’ splashed across the front page, with the newspaper believing Antonio Conte and Inter Milan will be parting ways, despite the club winning Serie A.

The reasoning is a desire from Inter to ‘downsize’ and put less money forward for the manager to spend. Conte, being Conte, isn’t pleased with this and Gazzetta feel it’s now just a matter of time until the exit is official.

Corriere dello Sport don’t think it’s quite so over yet, but they’re certainly not overly hopeful for a stay. When it comes to a potential destination for the manager, it’s stated he could take a sabbatical year, or move to the Premier League… where Tottenham would be awaiting him.

According to Corriere dello Sport, Tottenham ‘are crazy’ for the manager, with Spurs being repeatedly presented as especially keen by the Italian media.

Whether he’d be so tempted could be another thing entirely.

He currently has the best 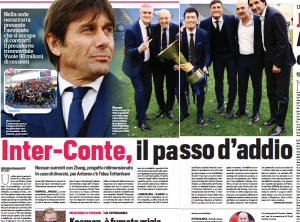 team in Serie A and is frustrated at a lack of coming investment. With Tottenham he’d be taking a team which finished seventh, doesn’t have close to the finances of their richer rivals, and who could lose their best player this summer.

Not to mention the inevitable clashes there’d be with Daniel Levy.