Manager Christophe Galtier this week announced he’s decided to quit the club and has opportunities elsewhere, and goalkeeper Mike Maignan has completed a medical to join AC Milan and potentially replace Gianluigi Donnarumma.

L’Equipe make clear they won’t be the only two leaving the French club, with Leicester City expected to be the destination for another.

Boubakary Soumaré has been strongly linked with the Foxes since the start of the month, and around ten days ago it was claimed a €20m+ offer had been sent by Brendan Rodgers’ side. Back then there was a feeling the deal could be confirmed quickly, however, Lille’s title battle naturally held more importance.

Wednesday’s edition of L’Equipe states Soumaré is heading for the exit, and ‘Leicester should be the destination’. 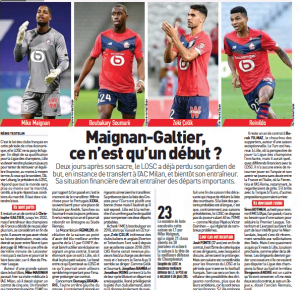 A transfer fee of around €23m is estimated, and the move is considered near essential for Lille given the player’s contract expires next summer.

Despite being champions, Lille need to sell and they require multiple exits because there isn’t one player who would bring in a huge fee.